So, I can barely type today. Holding my hands to the keyboard is causing all sorts of pain. You see, last weekend, I went rowing.
"Rowing??!@#", I hear you say, "Don't you use your legs for that? Doesn't that require some sort of balance so you don't fall in? How about you spend your weekends on the couch, watching Martha, and having a little cup of tea?"

No!!! Why sit at home in the safety of your own teapot when you can make an idiot of yourself in public!

You see, this was not a brave new world into which I was venturing. I'm familiar with the work of the rower. Very, very familiar with the work of the rower. You see, last year, I volunteered to be the cox for my university's team in a charity rowing event. Now, for those of you who were there, I'm sure you had a vision that just popped into your head, and surprisingly, it wasn't of me. For those who weren't, here is the story:

Each team was allocated a coach, and our team was allocated quite the lady's man. And what better way to show off being a "lady's man" than to wear lycra shorts.... all the time.... not just during sport. And what better way to show off these lycra shorts than to make sure they are bright in colour.... well, not all of the shorts. Our coach persistently wore black lycra shorts, with a middle strip of flouro green. Yes, the universe had used a highlighter pen to illuminate his "gentleman's area" (hahahahahahha.... sorry, I just really wanted to use that phrase).

Also, what better way to make a highlighted area stand out than to present it first. So, our coach had perfected a way to stand with his knees and shoulders in alignment, but his penis about 3 foot in front of him. Each to their own, I say, except when I'm sitting beside him. I had to be careful not to turn around too quickly, or I might have poked my eye out.

Anyway, this coach was very good at rowing, and very helpful to our team. However, as much as I tried to dabble in the coxing (ooohh.. blankety-blanks style double entendre!), my back just wouldn't stand up to the motion of the boat, so I had to stop. The first day after I left, our coach became the "fill-in" cox (and again!). If you can imagine how this man stands, imagine that sitting down as he sat in the cox-box (I'm not joking!! That's what it's called!!) My friend, Wendy, was in the first seat, as the first stroke (seriously!! again, not the name I chose), and she had to be particularly careful not to live up to that name!

So, as you can imagine, I ventured to rowing last weekend with a little trepidation.

Well, it was fine, everyone was appropriately clothed, and all coaches stood with their body's in proper alignment. Phew!

Now, when I say it was fine, I clearly was not talking about the actual rowing. The boat had been adapted so you don't need to use your legs. There are floaty devices on the side so it's hard to tip. It looks easy. It isn't.
I bobbed around in circles on the Maribyrnong river like the universe was playing a sick game of "spin the bottle".

However, here's a photo to prove I've been there.

Cheers, I'm off to highlight some pants.
L 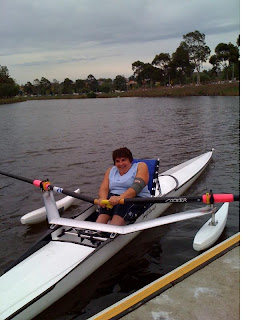 I live in a sub-culture, not a sub-urb

So, last year, about this time, I moved to Torquay.
I signed the contracts on Good Friday, during the Bell's Beach surfing carnival (I mean, during the same time frame. I don't mean that I took a break from surfing to sign the contract). That day, it was party-town, with people everywhere.
And then, 30 days later, I moved in..... to a hibernating, winter-in-summer-paradise, where I was the only person living in my street. SURPRISE!

It went back to a party-town overnight, sometime in October. If you come to visit, and you can stand up, you'll get a lovely sea-view from my lounge room. I'm not sure why I bought a house that caters for others and not for me, but we managed to change that. You see, if you stand in a specific spot in the corner, near the telly, squat down, and look up at a strategically angled mirror, you'll also see the sea.

The sea is this town. It is a surfing town. It's not unusual to see kids riding a skateboard to school, and carrying a surfboard (It's probably a year 10 elective). I'm not a surfer. I tried.... once.... unsuccessfully (not as unsuccessfully as scuba diving, but pretty close). You see, I was lying down on the board, and a big wave came. The helper (calling them this because I honestly don't remember who I was surfing with) let go of the board as the wave came. I did the "how-excited-am-I" screams which made the helper think I was doing the "I'd-like-to-stop-now-because-I'm-terrified" screams (mental note: need safe word), so they grabbed the board again.... at which point, I flew off the end, into the wave.... doing some sort of somersault.... with pike.... and jazz hands.

Anyway, because I don't surf, I've had plenty of time drinking coffee in this town (Yes,in between, I have gone to work at some stage). Basically, I've spent the last year noting the behaviours of my fellow townsfolk, and I have two questions:

Schoolies - if you need to have a lie down in my garden when you're walking home from the pub, have you stayed up way past your bed time?

Hanging ten - if I attempted to surf, what would it be called? Hanging-on-for-dear-life?

Right, that's me done. I'm going to go take a drop (apparently this is torquay-talk for going out for spot of surfing, but it only makes me think of wine!)
Cheers,
L
Posted by Unknown at 3:16 PM 2 comments:

Well then. It's been a while. What have you been up to?
Me? Thanks for asking.
I've moved house....again.

Yes, I know. The last house had the bath that was the size of a lagoon , and coffee within 100 metres. So, why would I want to move. Well, I see your facilities, and I raise you one.

The new house is technically part of a resort, so I have a bath that actually IS a lagoon (although, they haven't taken too kindly to my loofah and shower cap, and the management prefer to call it an "outdoor pool").
Also, not only is coffee within 100 metres, now, there is also wine, cocktails, and a lovely assortment of nibblies. I can also create an owner's account, and just receive a monthly bill. (I have resisted this facility however, as I'm pretty sure if I start booking up food and drink to my house, I'll be 09453405734534 kilograms and 324094-574375 dollars in debt by next year).

Now, don't think that I'm talking myself up here. There are downsides to living resort-style.

1. While everyone is partying up, I'm going to work.
2. There are a few couples in their 80's living there until the aged care facility is built nearby. This isn't any downside....until one of the ladies whips your ass in the lap pool.....repeatedly!!!
3. They have started to lock up the towels so nobody can steal them. Now I have to buy my own towels.
5. the aforementioned issue of weight and debt.
6. The biggest downside, Reg-the-circus-dog couldn't come with me. Sad, but he went to a happy home in Perth where he runs amok amongst children. Perfect.

On the upside, Lulu-the-unhelper-dog is no longer cranky at me!!! She's been strutting her stuff like nobody's business.

Right, so that's it from me. What have you been up to? Fancy a drink....just don't book it up to my room.