Dubai - no place for a wallflower

Well, it's 2am. I need to be up for work at 5.15, but I've got a touch of the jet lag, so I thought I'd get up and do something productive...and then I changed my mind and decided to write a blog.
"Where did you catch jet lag?", you ask. I've just been to a wheelchair basketball tournament in Dubai, as a classifier.

Fun, work, a few feisty conversations - all part of the job of classifying. For four games a day, I was shuffling those classification cards around on the table like nobody's business, using all of my best tarot reading skills. At any given moment, I could tell you how many points were on court...and the future influences over the players' love lives.

It was my first time in the Middle East, and I really enjoyed it. Now, if you've been a reader of my blog (or a listener to my bar stories) you'd know that I've had some interesting reactions around the world. In Bali, our driver asked if there was a possibility that I could still (yes, still) plant a rice field. In Vietnam, we easily crossed the crazy roads, mostly because the drivers had stopped out of surprise at seeing me. And in East Timor, almost everybody on the island knew who we were within 24 hours of arrival. I know I stand out. I'm a tiny woman, full of opinions and quick to laugh... oh, and then there's the whole "sitting in a wheelchair" thing. Let me tell you how those factors go down in Dubai.

Well... let's put it this way. I did not see another woman in a wheelchair for the whole time I was there. And, I wouldn't be surprised if the entire population of Dubai had also not seen another woman in a wheelchair for the whole time they were there. Normally, when children see me, they stare or ask questions (which are both perfectly natural reactions). However, in the shopping centre in Dubai, a small child (maybe 4ish) saw me in a shop..... stared.... then let out a blood-curdling scream! I could still hear him 5 shops away (yes indeed, I did run out of there like a puma!!)

On the second day, my friend Emily came to visit. Emily is also in a wheelchair, so firstly we created, and then doubled, the population of active women in wheelchairs in Dubai overnight. I took Emily through the shopping centre (getting lost along the way because all the shops stocked the same bedazzled Scarlet-O'Hara-in-a-manic-phase dresses) hoping that the poor child was not there, lest we give him post-traumatic stress disorder. You can imagine the reactions. Wallflowers in wheelchairs, you might not like Dubai. You can't blend into the background.

(On a side-note, I needed to know if there was space for Emily to stay over, so on checking in, I asked reception if I had my own room or if anyone was coming in later. I think they didn't understand my question due to my Australian accent, because the reply surprised me: "The team from Iraq are arriving at 7")

And yes, it does sound glamorous, Paris Hilton-style, to be recognised and noticed everywhere you go, but there are some times when being conspicuous is challenging:
1. Every morning, I got lost on the way to breakfast, and every morning, the same security guard found me, lost in a random corridor of the shopping centre.
2. For the first 2 days, there was no ladies toilet at the gym where we were classifying. I had to sneak into the mens, but sneaking was not so easy (the attached photo shows the "Ladies" sign that went up on day 3)
3. It's just like when I would play truant from lectures at uni (when I was a student, not a lecturer), and it was always noted (it would have been doubly noted if I was the lecturer!)

Anyway, that's enough for now. Next time we're all on this blog, I want to spend a bit of time chatting about opportunities for sport for those invisible women with disabilities in the Middle East. 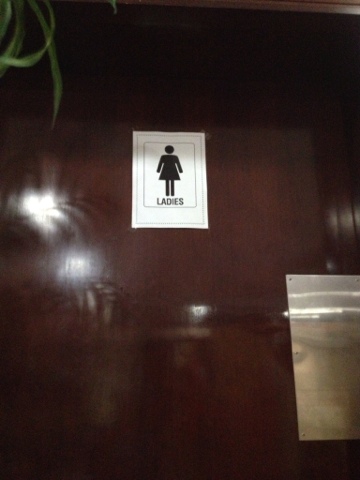 Posted by Unknown at 2:37 AM No comments: